The wait is over…!

It’s been a busy year in the Gorongosa National Park! From horrific tropical storms to wild dog puppies, there’ve been many exciting changes to our animal community. Our scientists have been hard at work gathering data crucial for understanding the effects of these dynamic processes. Once again, we’re excited to announce that we NEED YOUR HELP! The brand new season of WildCam Gorongosa has just launched with new images, new species, and new questions to answer! Head on over to the Zooniverse or hang around to catch up on some new developments that have been happening since our last batch of camera photos… 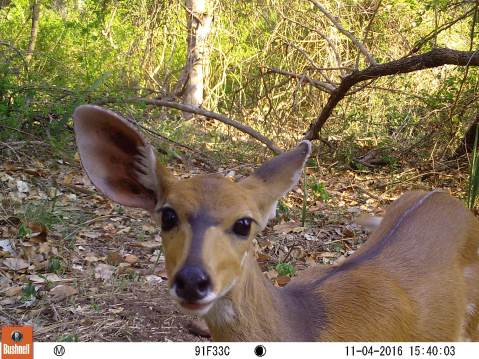 So what’s new in Gorongosa National Park? For one, wild dog PUPPIES! This beautiful endangered species was released in Gorongosa last year after a 25 year absence, the first reintroduction of its kind in Mozambique. These predators will likely be crucial for restoring ecological balance to this recovering system. It’s been exciting watching these dogs not only survive but thrive in their new home, producing their first litters of puppies earlier this year! Better yet, a second reintroduction of wild dogs is occurring as we speak. Will YOU be the first person to find a wild dog in our camera trap pics?

Another big event in Gorongosa National Park this year was the landfall of Cyclone Idai. In March, one of the worst tropical cyclones on record struck Mozambique, catastrophically impacting the lives and livelihoods of those in these coastal and floodplains areas. Gorongosa played an essential role in mitigating the cyclone damage by absorbing huge quantities of water – which are still being released five months after the actual event. While many camera traps did not survive the floods (!), our researchers are keen to use the data we were able to salvage to start understanding how animal dynamics were affected by this extreme weather event. Help them out by tagging images of “#flood” as you explore our new season of WildCam Gorongosa camera trap data!

The last image from a drowning camera trap!

Thank you so much for your patience as we’ve amassed this amazing new set of data. Check out WildCam Gorongosa and explore the open floodplains and tropical forests of Gorongosa National Park. We can’t wait to see what exciting new images you discover! For more updates on our new mobile app, enhanced field guides, new published research results, fun peeks “behind the scenes”, and to chat with our researchers, follow us on Facebook and Twitter. Happy classifying!

Where are the Aardvarks?

I’ve spent the last couple of days exploring WildCam Gorongosa data looking for insights into the Gorongosa aardvarks. I was motivated by numerous comments in Wildcam Talk about how rare aardvark sightings are. 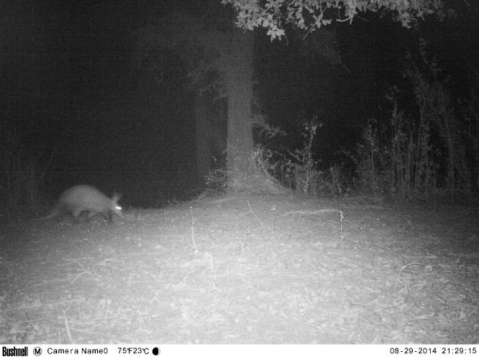 I started with the Wildcam Lab as an Explorer. The Lab houses a downloadable database of over 40,000 classified trail cam images. The download data includes links to the images and date, time, location, and other classification data. The image downloads can be filtered by many characteristics like species, habitat, seasons, etc. The downloaded data is in .csv format and can be processed by many programs like Microsoft Excel.

My initial “aardvark only” download from the Wildcam Lab produced only 16 images and three of those were not Aardvarks. So I decided to do a hashtag search for Aardvarks and the search returned about 100 more images classified as Aardvarks. I weeded out the incorrect classifications (white tailed mongoose, bushbuck and porcupine plus others). Here’s an example of a white tailed mongoose that was hashtagged aardvark:

Then I added to the download worksheet the images before and after those in the lab and search data.  I used Nor’s widget ( http://njstargazer.org/gorongosa.asp) to move through the image sequences to include all the images that contained Aardvarks. I ended up with only 126 images over the 3 years. Not many!

Those 126 images were from only 27 unique sightings or sequences based on the date and time stamps. All were of single individuals foraging at night. 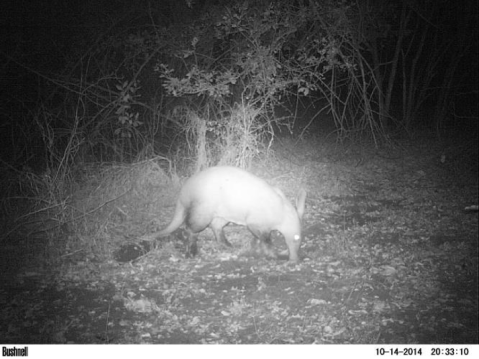 That likely means there are less than 27 total Aardvarks in the area monitored by these cameras! No young appeared in the images. 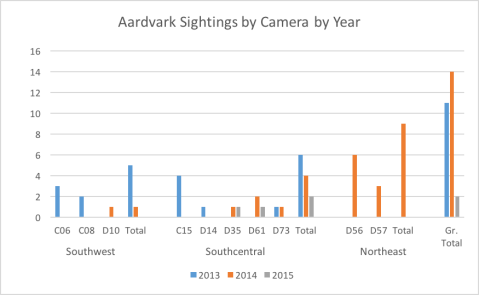 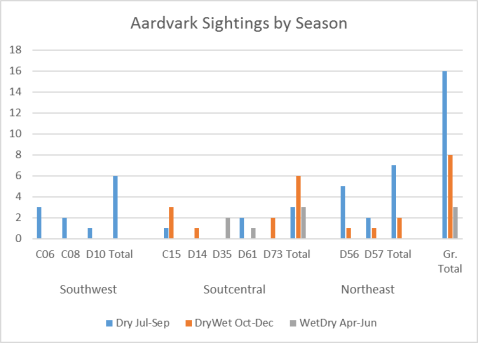 Wildcam is such an amazing project that we lay persons can explore and learn to our hearts delight. I’m happy to share my Excel worksheet with any of you that would like to see and use it. Send me @LeeReiswig a message and I can email or put it in the cloud for access. Enjoy exploring Gorongosa with these wonderful tools!

In the Tracks of Leopard

Wildlife populations in Gorongosa National Park in the Sofala Province of Mozambique are currently recovering from almost complete eradication after a long civil war. Antelope, baboons, and warthogs have come back in the thousands; elephant numbers are slowly growing, and even a small population of lions has returned. But everyone wonders: where are the leopards? With plenty of prey, suitable habitat and limited competition from more dominant predators (lions), they should be flourishing. So far, though, there has been no indication that they are in the Park. The question now is how to create and support viable corridors that support leopard recovery, as well as lion, wild dog and hyena.

Neighboring concessions have reported all these species. And as for leopard specifically, an adjacent forestry as well as a hunting concession a few kilometers from the Park is one such area that has claimed presence of leopards. So the grand adventure begins!

With the gracious donation of 25 new Bushnell cameras from the Howard Hughes Medical Institute and permission from the forestry concession manager we set out to investigate.

­Our colleagues organized a team of scouts to take us out to areas where large carnivores are frequently spotted. After over an hour’s drive on a bumpy road from the lodge through amazingly intact forests, we hefted our packs full of cameras and hiked down into a small gorge known to frequently be used by leopards. Almost immediately, the scouts spot a cat track. Too small for lion, it must be leopard. 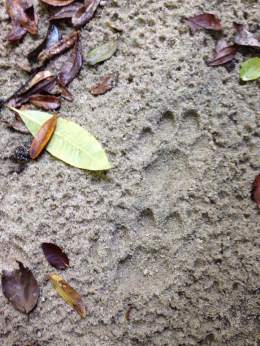 It was encouraging to detect their presence so early in our exploration. We ended up finding tracks all through the sandy gorge, some incredibly fresh, and it was clear that many different species were utilizing the river. It appeared the cats had been in the gorge almost staying just ahead of us as we walked. Needless to say, we blanketed the area with cameras, eager to find out what kinds of animal communities call this place home.

The next day, we visited a more open area where kudu, zebra, and other large antelopes are though considered rare inside Gorongosa. The scouts have also spotted small lions and believed that wild dog could be inhabiting the area as well. With only one permanent water source, a few cameras next to wildlife trails leading to the drainage should capture most of the area’s mammals. Though, we did put one up high in a tree in an attempt to capture whatever animals might be using an old dirt road. Thankfully, these rangers are much better climbers than I.

It was great working with the forestry scouts, and we both walked away with new skills. The information we gather from these cameras will help us better understand how much potential the area has for serving as a wildlife corridor into the park. Of course, habitat quality and the presence of apex predators are not the only factors that will enable a healthy park ecosystem. Recovery will depend largely on people. Unfortunately, a few snares were found along the way, but I am optimistic that a strong partnership between the park and the forestry concessions will continue to facilitate the recovery of Greater Gorongosa’s wildlife.

The steps we took last week – the many bumpy road kilometers – are the first of many as we try to unravel the structure and function of corridors for large carnivores in Gorongosa-Marromeu.

25 minutes after we deployed this trail camera she passed by… a healthy lioness with 2 new cubs. We are tracking them this week not far from Chitengo Camp (Gorongosa’s main tourist camp). We feel like we might as well be tracking a tiger as she is denning her cubs in and around the lush palm forests lining the beautiful Pungue River. Finding two new cubs on a trail camera is such a wonderful feeling. It means that the lions are breeding and, we hope, the lion population is growing. 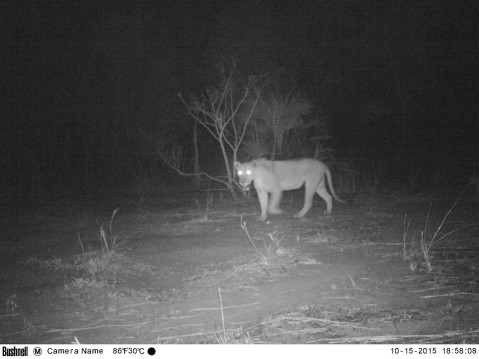